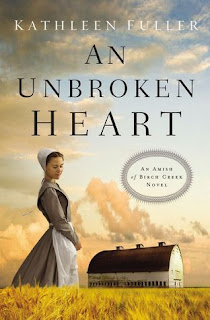 An Unbroken Heart is Kathleen Fuller's second book in her Birch Creek series although it can be read as a standalone novel.  It follows the life of Joanna Schrock and her family. Joanna is tired of being pushed around.  She remembers her days of being bullied on the school yard vividly. Her sisters tell her she needs to stand up for herself but that's easier said than done.  It's  not that she doesn't want to, it's that she doesn't feel she has it in her to speak up.

All of her life Joanna had been somewhat of a mouse. Often the victim of bullying when she was younger, Joanna never let it sour her sweet demeanor. She had a crush on Andrew Beiler ever since he rescued her from a school yard bully when she was twelve.  True to her  nature though, she doesn't reveal her feelings, she's just hoping he catches on soon. He makes her feel safe and loved.

She's finally caught Andrew's eye and she's super excited to be his girlfriend. If only he wouldn't treat her with kid gloves. She wants him to hold her hand, say he loves her. Anything but this awkwardness between them. She finally takes her sisters' advice to stand up for herself and proposes to Andrew. Enough with being meek and mild, she knows what she wants; Andrew!!  But does Andrew want her?

After the singing with Andrew, Joanna still feels empowered. She's finally fessing up to her parents how she feels about Andrew. How she feels her parents baby her more than her sisters. They have been trying to marry Sadie off for a long time now, but Joanna mention marriage and they flip their lid! She's had enough and she is telling them so when tragedy strikes, a buggy accident. Is this the price of standing up for yourself?

I thoroughly enjoyed An Unbroken Heart even though I haven't read the first one. I sympathized with Joanna. She had been through so much between the bullying, family issues, and her own struggles. Most women would have given up, but not Joanna. Underneath that quiet demeanor is a heart of a warrior. She has the power to overcome all that's in her way if she will just take a leap of faith and believe in herself. She needs to see herself the way God sees her. She is fearfully and wonderfully made. She needs to believe in herself. She also needs to believe in others. Some people do pity you when bad things befall, but most genuinely want to help. Not because of pity or because they're looking for something in return but simply because they love you.

An Unbroken Heart has all the elements of a wonderful story: intrigue, love, loss, tragedy and triumph. I recommend this story to anyone, even if you're not a fan of Amish fiction. This story will get its hooks into you and won't let go. The only down side is you may find yourself loving the characters so much you'll want to take up residence in Birch Creek.

You can grab a copy here: An Unbroken Heart by Kathleen Fuller
Posted by Chastity Ray at 3:41 PM