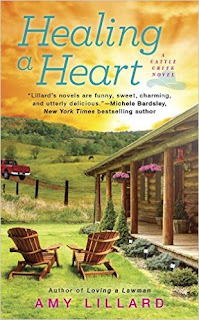 Healing a Heart is Amy Lillard's second novel in the cattle creek series. You could read it as a stand-alone, but I believe you will enjoy both books in the series.

Jake Langston has had enough!  With all of his responsibilities along with running the ranch and taking care of his daughter, he doesn't have time to keep running women off the ranch. Sure, being named the 15th most eligible bachelor in all of Texas was good for the ego, but, he is not interested in a woman. Been there, done that and to say it ended miserably would be putting it mildly.

Bre Talbot has no clue what she's doing at the Double Diamond Ranch. No, that's not true, she knows she has to tell Jake that she's carrying his child, she just doesn't know how. Maybe a simple "I'm pregnant" would do, but when she sees him ride up looking all kinds of mad, all coherent thoughts fly out the window. She manages to interrupt his tirade long enough to share her news only to be crushed when he tells her to "Get rid of it". She wants this baby more than anything. Bre lost her parents and her baby sister whom she practically raised, The baby would be her second chance at a family. She has no intention of following Jake's orders, nor does she want anything from him, she just thought he should know he is the father.

Both Bre and Jake have suffered their share of heartaches and disappointments, but can they come together for the good of their unborn child?

Jake isn't as hard as he'd like people to believe. Truth is he's afraid of being hurt again. When his wife died giving birth to their daughter, Wesley, he somehow felt responsible. He likes Bre and doesn't want her to suffer the same fate as his late wife. That's why he told her to have the abortion. As the news grows on him and he's had the chance to spend time with Bre, he couldn't imagine life without her or their baby. He's just not sure how to convince himself of that.

Bre is all alone in the world. Well, except for her baby. She doesn't want anything from Jake, they were a one night stand after all. She just knew that if she had family out there she'd want to know. She has no intention of staying but when Jake's mother and grandmother insist she decides to try and work out a plan with Jake.

Going back to Cattle Creek is like visiting old friends. I have to admit I didn't like Jake at first. He seems like a hot headed hard hearted cowboy but the truth is he's just afraid. Bless his heart he just doesn't know how to say things sometimes. I found myself wanting to tell him to just shut up, he was making things worse! Poor Bre can't seem to get a hold of her hormones or her overactive imagination. She tends to believe she has the situation all figured out but when life, or Jake, throws her a curve ball she panics. I felt sorry for Bre because she's all alone with only one true friend, Rick, who doesn't always give the best advice, even though he has the best of intintions.

Healing a heart will make you laugh, cry and believe that love really does cover a multitude of hurt and wrongs.

You can grab a copy here: Healing A Heart

*I was provided a free copy of this book. All opinions expressed are my own.
Posted by Chastity Ray at 5:17 PM