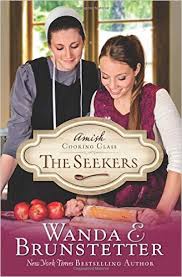 The Seekers is the first book in Wanda Brunstetter's Amish cooking class series. I've had the privilege of reading many of Mrs. Brunstetter's novels and must say that I was excited to have the opportunity to review this one.

Heidi Troyer has a life most people dream of. She's been married eight years to the love of her life, Lyle, has a farm, friends, pretty much anything a girl could want except one very important thing, a baby. She longs to be a mother and sometimes it's all she can think about, especially after the chores are done and her husband is off at work. She decides to teach cooking classes to help fill her days and to bring in a little extra money. She's not sure what to expect but with her huband's blessing she is looking forward to her new endevor.

Charlene Higgins is on cloud nine! Her boyfriend, Len, has just proposed and she can't wait to be married. She only has one nagging doubt she's worried Len's mother doesn't  like her very much. Maybe it has something to do with the mishaps Charlene had helping Annette a few times in the kitchen. She's also worried about being a new bride with zero cooking skills. When her friend, Kathy, mentions an ad in the paper about a cooking class, Charlene decides to take the class and suprise Len and his parents. Maybe if she proved herself capeable in the kitchen Len's mother would then approve of her marrying her son.

Kendra Perkins can't seem to catch a break. Not only did she fall for Max's deceptive charms, she ends up pregnant. Her dad is furious and kicks her out of the house. He's on the church board and can't believe she would embarass him that way. Kendra feels abandoned and without hope. She's crashing at Dorie's, her friend, but it's not a permanent situation. She needs a job, a place and a plan, but right now she has to conquer morning sickness. Dorie sees an ad for cooking classes and offers to pay for Kendra to go. She's hoping it will give Kendra something to look forward to and lift her spirits a little.

Loretta Donnelly has always been facinated with the Amish way of life. Maybe it has something to do with her grandparents being Amish, and her parents being English. Who's to say? Since Rick died she's busy raising Conner and Abbey on her own. She spends her days looking after the children and the house. As she's sitting at the table reading The Budget, an Amish newspaper, she sees an ad offering cooking classes. She debates on spending the money, but decides it would be fun to take a cooking class and learn how to prepare authentic Amish meals. She's excited to learn and do a little something for herself.

Ron Hensley is a Vietnam Vet and a drifter. After the divorce he had no desire to stay in one place very long so the RV worked out. What started out as an adventure though has quickly become a burden. The RV takes so much gas to go from place to place, he finds himself relying on the kindness of strangers to allow him to park his RV at their place. When he comes to the Troyer's place he decides it looks nice enough to stay, for a little while at least. When he gets roped into taking Heidi's cooking class he gets way more than he bargained for.

Eli Miller has been friends with the Troyer's for years. Since his wife Mavis died; he's been surviving on toast and boiled eggs. He never learned to cook and never really had a need to as long as he was married. Seems like everything has changed. While visiting with Lyle, he mentions that Heidi is offering a cooking class and suggests Eli might want to join. At first he thinks he's joking but after giving the idea serious thought he has to agree it has some merit.

I'm not sure what Heidi was expecting when she offered this class but I can promise you she got more than she bargained for! Each of the students has some sort of struggle in their personal life. She longs to help them but is often unsure of what to say. However, she makes sure she puts a scripture on the recipe cards she gives them in class. Maybe it will help each of them with their struggles.

I fell in love with the story as well as the characters. I loved how each of their stories intertwined. Although, I did have a couple of favorites, Kendra and Heidi. I felt for Heidi, here she is wanting nothing more to be a mom and in walks Kendra into her cooking class.  A teenage mother who has no clue what she's going to do. I kept hoping Heidi and Lyle would adopt Kendra's baby, but with Lyle so against adoption I didn't see how that could happen.

Poor Kendra wants nothing more than to be forgiven for her mistakes, but that seems absolutely impossible with her father unwilling to budge. She even reached out to her mom and sisters, but he found out and threatened to kick her sisters out if she ever contacted them again. She's so angry at him, and God, that she can't seem to do anything but cry and feel sorry for herself.

I can't wait for the second novel in the series so we can see how the students are doing and find out whether Kendra is having a boy or a girl!

If you're looking for a great new read I highly recommend The Seekers. I believe you will fall in love with as much as I have.

*I was provided a free copy of this book, All opinions expressed above are my own.

You can grab a copy here:The Seekers
Posted by Chastity Ray at 2:32 PM