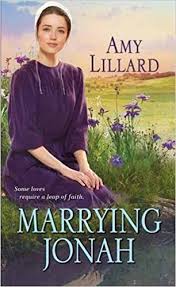 Marrying Jonah is the 6th book in  Amy Lillard's Wells Landing series. You could read each story by itself, but they are so good you will want to read the whole series.

Sarah Yoder has made it no secret that she has her heart set on Jonah Miller. She's made a fool of herself at lengths that she has gone to get his attention. Being the district's teacher, her first year didn't go quite as planned. Maybe if she had spent more time preparing for class rather than chasing Jonah, but all that is in the past now. She has made her decision to move on and forget Jonah. Even if it means she will be an old maid, no man is worth making a fool of yourself over, especially Jonah Miller.

Jonah hasn't quite gotten over his old girlfriend, Lorie Kauffman. She left him for the English world and a side of her family she never knew existed. Jonah made a fool of himself chasing after her, well not after her per se, but he wanted to know what is was in the English world that made her leave her Amish roots and most of all him. But he knew, deep down he knew, Lorie went in search of herself and found it in the English world. He had to find a way to move on and forget her.

What's that saying; you never know what you have until it's gone? Jonah spent all his time moping after Lorie that he missed what was right under his nose, Sarah Yoder. She had made it painfully obvious that she liked Jonah, but he never paid it much thought. Then at the back to school picnic she made it clear that she wasn't available and she went out of her way to avoid him and that piqued his interest.

It seems hard for a man and  woman to be friends. Usually one winds up attached and the other one is oblivious. Sarah though, has decided Jonah needs a friend and while no longer interested in him romantically she can be there as a friend. Jonah desperately needs a friend and he knows he can trust Sarah. She speaks her mind and let's him know where she stands. He finds that attractive even though he doesn't mean too. One thing leads to another and Sarah finds herself with child. She's embarrassed and mortified and worst of all she knows Jonah will have to marry her even though he doesn't love her.

Amy Lillard has a unique gift of crafting stories that touch your heart. I truly felt for Sarah, she made a poor choice and now she's going to be bound to a man who she believes will never love her, all the while he owns every piece of her heart. She's also subject to the gossips. They say she trapped him and nothing could be farther from the truth. I wanted to cry right along with Sarah. Life is so unfair!

I also had a soft spot for Jonah, bless his heart, he's so busy looking in the past that he can't see his future. He cares for Sarah but he's afraid to care too much lest she run off with his heart. Every time they make progress on growing as a couple he has to go and "be a man" and say something dumb. lol. I wondered if they would ever get their act together.

Marrying Jonah is a beautiful love story. It shows that love truly does bear all things. It doesn't matter how you start, it's how you finish and Sarah and Jonah will have a strong finish...if they can ever get on the same page.

I absolutely loved Marrying Jonah and I know you will too Grab you a copy and let me know what you think! Happy Reading!

You can grab a copy here:Marrying Jonah

*I was provided a free copy of this book. All opinions expressed above are my own.
Posted by Chastity Ray at 3:12 PM