To Win Her Favor 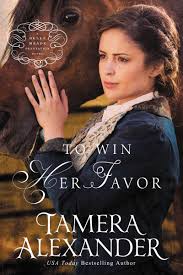 To Win Her Favor is Tamera Alexander's latest novel in her Belle Mead series. While I enjoyed the book very much, I feel I should put a disclaimer here. Throughout the book the author makes use of the n-word as it refers to black people as well as Irish. I realize that during the time this book was set, it was perfectly acceptable to do so, however, I do not condone the use of that word nor do I use it myself. All that aside, it truly is a beautiful story and I hope you will give it a try.

Maggie Linden has lost so much to the war, her brothers, her boyfriend, and now she may be losing her home. Linden Downs is a beautiful property and in it's prime was known for breading some of the best thorough breds around. Maggie has a dream of restoring it to it's former glory, that is if her horse Bourbon Belle wins the Peyton Stakes race. Maggie loves to ride and has trained the horse since it was a foal, she knows she can do this, that Bourbon Belle can win, but when her jockey and his family run away to save their lives, Maggie isn't sure what she can do. She believes in her heart that Bourbon Belle was meant to be a champion, she just isn't sure how to go about it since society doesn't believe a woman can race and on top of all this, her jockey has moved away.

Gilbert Linden loves his daughter, Maggie, more than life itself. He knows he is terminally ill and with the farm in foreclosure and due to go up for auction in the next two weeks, he's desperate to find a way to secure not only Maggie's future but the future of Linden Downs. When he meets Cullen McGrath he believes him to be an answer to his prayers. Although he is Irish, he seems to be a man of character. Gilbert makes Cullen an offer he can't refuse, the opportunity to buy Linden Downs for less than its worth. The catch? He has to marry Maggie. At first Cullen thinks the man must be joking but after having a serious heart to heart he realizes he's serious!  Being Irish, Cullen knows that the opportunity to buy land, much less land like Linden Downs' 400 acres, is going to be few and far between. He's just not sure about marrying a woman to get it. No matter how pretty Maggie might be.

To Win Her Favor is a beautiful love story about finding true love in the face of adversity. Maggie wants to save her land and race her horse, but society makes it impossible for a woman to do either of those things. Cullen faces adversity simply because he is Irish.The minute he opens his mouth people's opinion of him changes. What was Gilbert thinking asking Maggie to marry a social pariah like Cullen?

Cullen McGrath was my favorite . Sure he's made mistakes in his past but he's a changed man. He's angry at God for the death of his wife and child, but he refuses to go back to his old ways. He just wants to buy a farm and live out the rest of his days. When he agrees to marry Maggie he does so simply as a business arrangement. He will protect her and look out for her best interest but he has no intention of falling in love again. Once was enough. He even endures snide comments and stares from the towns people. His kind aren't welcome in town, never mind that he is honest and hardworking, just being Irish is enough to make people turn and walk the other way. I liked how he could have resorted to violence, or name calling or any number of things but instead he simply walks away. He let's his actions speak louder than words. I think that's what Gilbert saw in him. A man of character who was honest, loyal and would stop at nothing to protect Maggie.

Maggie doesn't see herself as needing protecting. Being the youngest and having four older brothers, she considers herself quite capable of taking care of herself, no matter what society says. She knows she will be at the mercy of the townspeople when papa passes away, but surely that's better than marrying a stranger. But marrying a stranger is the only hope she has of keeping her land and her dreams alive. She stands strong in the face of adversity, when her jocky left town she could have quit, but, she didn't, she kept training Bourbon Belle and looking for another rider. When her father wanted her to marry a stranger she could have said no, and she almost did, instead she married the Irishman and is determined to make the marriage work. When the towns people started treating her as a pariah for being married to Cullen, she could have hung her head in shame, instead she walked proudly on his arm, although maybe not at first. Maggie has grit an it takes grit to make a marriage work when all of life's obstacles are stacked against you.

I truly enjoyed To Win Her Favor and I think you will too! I'm anxiously awaiting to see what Tamera Alexander has in store for us next!

You can grab a copy here: