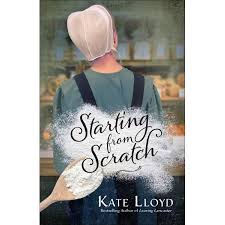 Eva Lapp is a beautiful hard working girl. She spent most of her life pining after Jake Miller who ran off to join the English world when they were younger. She spent years hoping Jake would come back and declare his love for her, when he didn't she spent the rest of her life comparing every man to him. She knows it isn't fair, but he was her first love and no one could ever measure up. Now at 29, she considers herself to be an old maid. She's not of course, but she has grown content to live at home with her mom and dad. When her dad retires, leaving the farm to her older brother, she's forced to move out and figure out life on her own.

Her new job at the local nursery seems to be the best way to start from scratch. She's always loved gardening and digging in the dirt over the domestic duties most girls seem to prefer. This job not only fulfills her life-long passion, it also comes with a cabin for her to live in. Upon arrival though Eva quickly figures out things might not be as perfect as she thinks. First of all, it's not the nursery she will be working in, but rather she will be running the cafe, replacing her cousin, Olivia, who has recently gotten married. She's not the best cook in the world, but, she's determined to give it her all because she doesn't want to admit she's a failure and she has no where else to go.

With the help of a few friends she meets along the way, Eva starts to believe in herself and embrace her new life. There's Stephen Troyer, the manager of the grounds while the owner is gone. He's a nice handsome Mennonite man who believes in Eva and goes out of his way to help her. There are definitely sparks there but she isn't sure she wants to peruse him because of their different faiths. Despite her protests however it seem fate has a different idea.. Eva and Stephen seem to find themselves crossing each others path more than necessary and neither can find a reason to complain.

Then there is Beatrice, she looks after the house whether the owners are home or not. She's at loose ends with the owners being gone and offers to help Eva with the cooking for the restaurant. Beatrice knows of Eva's past with Jake Miller, but when she notices the sparks between her and Stephen, she can't help but try a little matchmaking to get them together. Anything is better than Jake Miller, at least in Beatrice's opinion.

When Jake Miller unexpectedly shows up and declares his love for Eva it throws her heart into confusion. When she sees him with a pregnant English lady she feels betrayed. What will Eva do? Do you start over and take Jake at his word? Or do you choose Stephen, and the budding romance?

I have to admit, I found myself getting a little annoyed with Eva. She seemed to fluctuate between being self sufficient and totally dependent on others. I really thought once she moved out on her own and starting running the restaurant that she would have more confidence in herself. She'd more than proven herself capable, but for some reason she wouldn't believe in herself. Then there's the matter of Jake Miller. I won't ruin the book for you but I will say out of her two love interest I preferred Stephen. Maybe it's because he hadn't hurt her in the past, or because he would truly be her fresh start, either way I was and am team Stephen.

Despite my slight annoyance with Eva, I truly enjoyed this book. It has drama, intrigue and even romance, what more could you ask for? I also love the redemptive theme throughout the story. It's written in a way that's not preachy but you know it's there. I enjoyed the role friendship played as well. Sometimes we find help in the most unlikely of places and when we accept that help we end up making friends who become family.

Starting from Scratch is a wonderful story of love, redemption and second chances. It will grip you from the beginning and won't let you go until the very last word. So grab a copy and get ready to meet Eva, Jake and Stephen. Be sure you come back and let me know if you're team Jake or team Stephen!

You can grab a copy here:Starting from Scratch