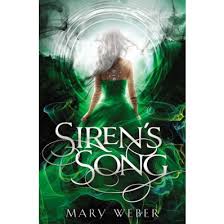 Siren's Song is  Mary Weber's third book in the siren trilogy. If you have not read the first two books; Storm Siren and Siren's Fury, you need do that now. You shouldn't read them as a stand-alone and I sure don't want to spoil anything for you. I will post links at the bottom so you can go grab a copy of each.

I absolutely loved this series. I didn't think I would. I'm particular on what YA fiction I read because some of it gets redundant. There are only so many vampire stories or dystopian series you can read before they all blend together. This however, grabs your attention from the get go and doen't let go until the end of book three. If then, because to be honest, I'm really wishing there was a book four. Yes, it's that good.

Nym is a female Elemental, and she isn't supposed to exist. She was never supposed to be, but yet here she is. Once a slave now turned war hero she still struggles with her inner demons, to come to terms with what she is and what she is supposed to do with it. She is more powerful that anyone can ever imagine, but how can she tap into that power and save her people,and, her love Eogan, and defeat Draewulf. They are being hunted to the death and she is their only hope. Even though she's not completely sure how to save them. She didn't ask for this, but she will do what she has to do to save Eogan.

Draewulf is the stuff nightmares are made of, seriously. He is basically a shape shifter that is half wolf and half man. Whomever he enters he destroys from the inside out, absorbing their soul and tearing their flesh when he's done. He is pure evil. Not even his daugher is safe from his wrath. His main goal is to last forever. How will he do that? By destroying all of the royal bloodlines of Tulla, Cashlin, Faelen, Bron and Drust. Will the people fight back? Certainly and that just makes it all the more fun for this demented monster and his dark army.

Never have I been so captivated by a story as much as this one. It's a classic tale of good versus evil, yet it's not. There is so much more like the inner struggle to love yourself. To believe you are wothy of a destiny bigger than you ever dreamed. To ignore the naysayers and possibly overcome a colorful past.  No one is truly good, we all have things that make us less than proud. Truly evil? Well other than Draewulf, I'd say no one is truly evil.

By the time you get to the third book the characters become friends. Egogan, Nym, Rasha, Myles, Colin, Brek, Kenan, Kel, a loveable band of misfits if there ever was one. Some are royal, some are slave, some are Uathuils, others soldiers but all bonded by friendship and their desire to save their people. I loved the fact they weren't all the same. They weren't even from the same countries, yet they looked past each other's differences and annoyances and became friends along the way. Despite the horror and devastation of war they always had each others backs and would walk through fire, or a dark army to help their friends.

So what are you waiting for? Grab yourself a copy and join Nym and her band of misfits on a journey of a life time that will touch your heart in a way you never imagined.

*I was given a copy of Siren's Song from the TNZ Fiction Guild in exhange for an honest review. The opinions expressed above are my own. 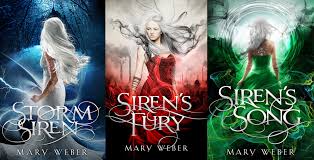