A Dream of Miracles 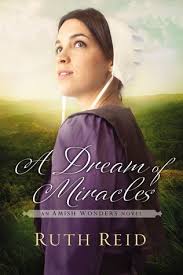 Mattie Diener has recently become a widow. Left alone to care for her two young children, Nathan and Amanda, she is doing the best she can. When Nathan gets sick and her home remedies don't help, she does the only thing she knows to do, she carries him to a local doctor they've seen before. Unfortunately, said doctor is on vacation, and she's forced to deal with a new doctor who is filling in.

Doctor Wellington doesn't seem to care for the Amish too much. She becomes immediately suspicious of Mattie when she notices blisters in Nathan's mouth. She doens't seem to care for the way Mattie coddles her children or speaks to them in Pennsylvania Deitsch. She admits Nathan to the hospital with little or no explanation and when it takes Mattie three hours to get him there she calls Child Protective Services to investiagate.

Bo Lambright is the investigator called to Mattie Diener's case. Something strikes him as odd from the get go. The hospital staff, as well as the doctor, seem ignorant to the Amish way and their beliefs. He knows in his gut that Mattie has done nothing to harm her children but he just has to prove it, even if all the evidencce seems to prove otherwise.

It will take a miracle to straighten all this out. Evidence seems to be mounting against Mattie even though she did nothing wrong. Bo is so sure of her innocence he's staked his reputation on her being cleared of charges. His partner, Erica Davis, seems inten to bury Mattie under the jail even though this is her first case and Mattie has never been accused of abuse before.

A Dream of Miracles is an enthralling story that will keep you in suspense until the very end. I don't want to spoil it for you or give too much away, but I hope you will grab you a copy and see for yourself.

You can grab a copy here;A Dream of Miracles