A Love Made New 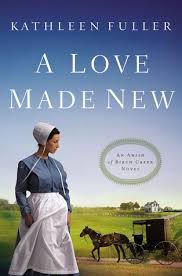 A Love Made New is Kathleen Fuller's third book in the Amish of Birch Creek Series. It can be read as a stand-alone if you like, but I believe you will like the entire series.

Abigail Schrock just knows her boyfriend, Joel Zook, is going to propose any day now. After dealing with her share of pain and loss, Abigail is ready to move forward with her life. When Joel asks her to come by after church she could hardly contain her excitement. When she arrives at his house, Joel delivers some devastating news, not only does he not love her, but he's in love with someone else.

Asa Bontrager has lost everything. It was his own fault really. God told him to move back to Birch Creek, but Asa didn't want too. He had a good job and a fiancee, what more could a guy want. Slowly but surely, one by one, God took those things away and finally managed to get Asa's attention to go back to Birch Creek. When he sees Abigail leaving Joel Zook's looking sad, he wants to help her somehow.

Abigail has low self esteem, she doesn't believe herself to be pretty, simply because she's a bit more full figured than her sisters. She believes that's why Joel left her, because in her mind she is fat. She's also sick and tired of the pity. People pitied her after her parent's death, they pity her because she's bigger than her sisters and unmarried, surely when people find out Joel left her they will pity her again. All she wants is to love and be loved in return. When Asa comes up beside her on her walk home she takes her frustration out on him. What would a guy as handsome as Asa want with her?

A Love Made New is a story of acceptance and learning to follow God wherever he leads you. It may not make sense but the journey is definitely worth it. Abigail struggles to find her place. She seems to think that outward appearance determines self worth. She has a pity party from time to time, but always manages to pull herself up before she wallows too much. I can relate to Abigail. Sometimes it's hard to be the only one who looks, thinks, talks or maybe acts differently. But that's exactly what he's called us to do, be different. If he made us all exaclty alike how boring that would be.

Asa is on the road to learning to follow God's will and trust His timing. I'm not sure if Asa thought when he came back to Birch Creek that everything would fall immediately into place but it didn't. He figures out quite quickly that Abigail is the one God meant for him, but convincing her of that could take some time. For one thing, she's just gotten out of a relationship with Joel and second she seems to have image issues. To him she is the most beautiful woman in the world, he thinks Joel is a fool for letting her go, and he's not sure why she is so sensitive about her weight.

I love how the author makes the characters real and able to relate to. Just because they're Amish doesn't mean they are perfect. I think sometimes that's a big misconception, not only about the Amish, but also about Christians. We struggle with normal day to day things just like everyone else. The difference is, we have a loving Savior that wants desperately for us to accept Him and see ourselves in his eyes.

*I was provided a free copy of this book. All opinions express above are my own.
Posted by Chastity Ray at 10:50 AM