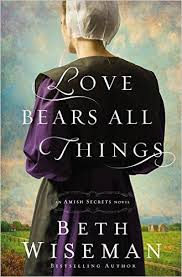 Charlotte Dolinsky first met the Bylers when she traveled to Lancaster County to figure out why her brother, Ethan, committed suicide.  She lied and pretended to be Amish to get close to the Kings, but little did she realize they would become her family. After revealing her lie and making ammends Charlotte moves back to Houston. Things seem to be going fine until her boyfriend, Ryan breaks up with her. Okay, maybe not fine seeing as how she's on the verge of financial collapse and she's just been given an eviction notice. What on earth is she going to do? Sure she has the house her brother left her in Lancaster County, but can she make a home there?

Jacob King feels smothered. He's always been a little different than the other Amish, loving books and having a desire to learn all he can. He's tried his best to fit in, even finding a girl and asking her to marry him, Annie Byler. As the wedding draws closer Jacob just can't seem to shake the need to get out and join the English world. Maybe not permanently, but he feels he should just try it.

Annie Byler is devastated! Jacob has ran off in the middle of the night not telling anyone, including his mom and dad, where he's going. She's worried sick. What's she going to do if he never comes back? She will be left alone to face the consequences of their actions. She's pregnant with Jacob's child and she has no idea what to do. She doesn't want to tell him because she's afraid he'll only come back out of obligation and not love. She's running out of time and she's going to have to eventually tell her parents and possibly face shunning.

Love Bears All Things is a great reminder that no matter what, love will endure. When we are at the end of our rope and facing our greatest fears, what drives us forward is love. Annie could have given up, she could have blamed their mistake solely on Jacob, but instead, she holds out hope that her love for him and his love for her and his family will be enough to bring him home.

Charlotte isn't sure God is listening anymore, she's poured her heart out to him more times than she can count. She's desperate and running out of options, when Jacob shows up on her door step after running away from home, it's the love of friendship that spurs her to try and help him while gently nudging him home. It's also the love of the King family that makes Charlotte believe she can come to Lancaster county and start over. That she can build a life where one of her life's greatest tragedies happened.

Love Bears All Things is a moving novel that will have you giggling one minute and fighting tears the next. Love is such a powerful emotion and comes in all forms, Wiseman is a master of expressing all of those through the characters of the book. Love Bears All Things will take you on a journey, and once you've finished the book (journey?) you will be better for having taken it.

"Now these three remain: faith, hope, and love. But the greatest of these is love." 1 Corinthians 13:13

* I was given a free copy of this book. All opinions expressed above are my own

You can grab a copy here: Love Bears All Things