More Than A Marriage 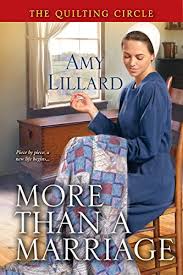 More Than a Marriage is a Quilting Circle novella by Amy Lillard. It's the third novella in the series but can be read as a stand-alone if you wish. Personally, I like to read the entire series.

The Amish marry for life. Tess and Jacob Smiley knew that going in. What they didn't count on however was being this unhappy. Jacob wanted to move with his family to Wells Landing for the opportunity to buy a farm and provide for Tess and any future children. Tess didn't want to leave her family but she believed in Jacob and his dream.

Wells Landing isn't all it's cracked up to be and Tess is unbearably unhappy. For starters, Jacob had to take a roofing job with an English company. That wouldn't be so bad except the job came with a cell phone.A cell phone that Jacob keeps his head buried in. He never listens to her anymore and she can't remember the last time they sat and played a game together. She's proud of the fact he works so hard she just wishes he had more time for her.

Jacob is bone tired. He works so hard doing a job he hates to support Tess and the life they want to have. Even if it means putting in extra hours. They need all the money they can get to save up and buy a farm. All he wants to do when he gets home is put his feet up and relax. He pulls out his phone because Tess usually has her face buried in a seed catalog or reading up on how to make goat cheese. He hates those goats! They remind him of his failure to provide as a husband and are just more work on Tess.

It's been said comparison kills joy. Tess is so busy looking at her friends and what she assumes is their perfect life and marriage and comparing it to hers. She longs for what she thought marriage could be that she doesn't see what she has right in front of her.

Jacob isn't without fault though, he's selfish and rude, I'm not sure he means to come off that way, but he does. He doesn't share his thoughts and feelings with Tess and when she doesn't get what he says he gets angry. Take the goats for instance, Tess loves those goats. She sees them as the children that the Lord hasn't blessed her and Jacob with yet, she also sees them as a way to help her husband save and provide for their family. They're her contribution to the life they're trying to build. Jacob sees them as a nuisance and a sure sign of his failure. Instead of talking to Tess about how he feels, he up and decrees that the goats have to go and he's going to sell them no matter what Tess says.

More Than a Marriage is a wonderful book. You will love and relate to Jacob and Tess. It's so easy sometimes to get caught up in the day to day struggles that you forget what a wonderful life and spouse you have right in front of you. I love how they never gave up on each other, even when they were struggling to communicate. It was sweet seeing Jacob trying to court Tess and understand exactly what went wrong.

I truly believe you will love this book and read it again and again.

You can grab a copy here:More Than a Marriage

*I was provided a free copy of this book. All opinions expressed above are my own.
Posted by Chastity Ray at 2:53 PM