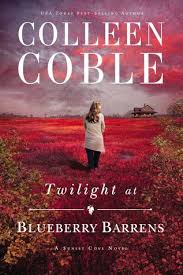 Twilight at Blueberry Barrens is Colleen Coble's third book in the Sunset Cove series. Although it is the third book it can be read as a stand alone. Having not read the other two in the series, yet, I was expecting a normal romance, boy meets girl, they fall in love, but what I got was so much more!

Kate has had a weird childhood to say the least. Her mother was mean, possibly even abusive, and made Kate earn any scrap of affection she might send her way. After going to prison she leaves Kate in charge of her blueberry barrens. Kate ,of course, feels the family obligation on her shoulders and wants to make the barrens a success. When her barrens refuse to yield a crop, Kate is forced to find another way to make an income for the year. After talking it over with her sister, Claire, she decides to fix up and rent out the cottage on her property.

Drake Newham wasn't prepared for this, having his brother and sister-in-law murdered,leaving him to care for this two nieces. He's trying to come to terms with it, but he just can't believe what the police say, that his brother, Heath, murdered his wife Melissa, then killed himself. It's just not possible! He becomes even more convinced when someone breaks into his house in the middle of the night. Needing to get away and find some answers he heads to Maine to hopefully clear his brother's name and keep the girls safe.

Talk about being in the right place at the right time, Drake shows up needing to rent a place just as Kate is renovating the cottage. He also needs someone to watch his nieces while he tries to work and do a little digging into Heath and Melissa's deaths. He hires Kate, but he's not completely sold on the idea she's the right girl for the job. Especially when he learns her uncle, who was in jail for murder, escapes. Add in the fact there's an illusive stalker/killer in town and you have all the makings of an epic adventure!

I was pleasantly surprised by Colleen Coble's ability to keep me guessing until the end. Usually, I'm able to figure out who did what by the middle of the book, but not this time. There were too many viable options and she didn't tip her hand until the very end! I'm also glad that even will all the drama and intrigue that the story still had a happy ending.

Kate despite her tumultuous upbringing has grown into a woman of faith. She is strong, loyal and a role model that people can look up to. She's overcome more than her share of hardships, including recovering from aplastic anemia and reconnecting with her sister, Claire, who her mother gave away and lied about. Most women would shy away from life or be so meek and mild that people would walk right over them, but not Kate. Oh, but can she trust in herself enough to believe she is worthy of love? That she doesn't have to earn it, but that people can and will love you just the way you are?

Drake is determined to solve his family's murder and raise these girls the best he knows how. Will his determination blind him to what's right in front of him? Will he ever be able to truly trust Kate and believe that she wants to help and only has his and the girl's best interests at heart?

Twilight at Blueberry Barrens is an epic adventure filled with drama, intrigue, but most importantly love. I hope you will grab a copy and experience the adventure for yourself.

You can grab a copy here: Twilight at Blueberry Barrens

*I was provided a free copy of this book. All opinions expressed are my own.
Posted by Chastity Ray at 1:00 PM