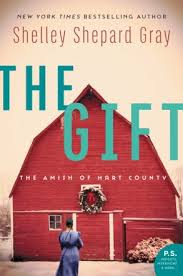 The Gift is Shelly Shepard Gray's third installment in her Amish of Hart County series. Although it's the third book it can be read as a stand alone. I believe once you read it though you will go back and read the entire series so far, it's that good!

Susanna Schwartz and her family are enjoying their new farm. On her way home from dropping her sister off at a friends house, Susanna has a buggy accident. It takes her a few weeks to recover, but once she's ready she is excited to attend their first church service in the new community. When she receives a less than warm greeting she is confused as to why half the community is angry with her and her family. They had hoped this was a chance for a new beginning, but she's beginning to think they will never be welcome.

Neil Vance and his family are the talk of the town. His dad finally had to come clean about his gambling and all the debts he owed.The family had to put the farm up for sale. That's bad enough but the family that bought the farm barely offered them enough to make it worth selling. Forced to move in with his dad's brother, Joseph, the family's shame and anger is at an all-time high. Neil can't stop thinking about the girl he helped in the buggy wreck. She was the prettiest girl he had ever seen and he would love to see her again. Imagine his surprise when the girl of his dreams shows up at church! Things were going along great until he learns her name, Susanna Schwartz. Then his admiration turns to anger, her family is the family that bought his farm, and in his opinion cheated his family.

The Gift is a great reminder that there are always two sides to every story and that things aren't always what they seem. Susanna and Neil spend a great deal of their time trying to figure out their friendship because of family bias. I understand the need for family loyalty but sometimes you have to make up your own mind about a person. Neil is hurt and angry and sometimes he takes that anger out on Susanna. What I love about him though is that he's quick to apologize and mean it. You have to give him credit for that. I know people who are wrong and know they are wrong but never will admit it. Neil isn't a guy who plays around with someone's feelings. He's a straight shooter and you always know where you stand. He comes off as gruff and abrasive at times but I really liked the fact he wasn't a flirt.

Susanna lacks self confidence. She always sees herself as an odd ball and an ugly duckling, which couldn't be further from the truth. Sure she isn't as outgoing as her sister, but she is a true blue friend and will stick by you no matter what. I love her heart, she is open and honest and willing to do just about anything to help a friend. Her shyness makes her a little awkward in social situations, but once you get to know her you will love her. I really liked Susanna, I feel like we could be friends in real life.  She has a kind and compassionate heart and isn't overly dramatic. I felt bad for her though, because she kind of took the brunt of the Vance's family anger for a while, but she was persistent and eventually won them all over.

As Neil and Susanna's friendship grows a series of random accidents has them questioning everything they know. Can Susanna trust Neil? Or could he be the one causing her family all the trouble? When Susanna shares with Neil her belief that these accidents are anything but random their friendship will be put to the ultimate test.


Shelley Shepard Gray has done an amazing job of weaving mystery and romance together. You will be hooked from the first page and won't be able to put the book down until you finish. She creates characters that are flawed yet have redeeming qualities and you will find yourself having a hard time remembering they are fiction! I absolutely loved The Gift and believe you will too.It would make a great gift or stocking stuffer for the book nerd in your life. And if you're like me and are the book nerd in your family treat yourself to this great book. You'll be glad you did!

Here's what other's are saying about The Gift: http://litfusegroup.com/author/sgray

*I received a free copy of this book. All opinions expressed above are my own.
Posted by Chastity Ray at 5:35 PM