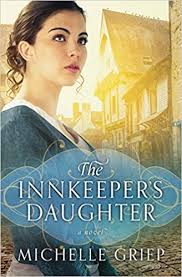 The Innkeeper's Daughter isn't a book I would typically read. I do like historical fiction, but I'm not always a fan of espionage. When I read the back cover; the story seemed promising so I decided to give it a chance. Let me just say, best decision I ever made! Little did I know how much I was going to love The Innkeeper's Daughter.

Johanna Langley is determined to keep her family Inn, The Blue Hedge Inn, at all cost. It's all her family has left. Her gambling father died and left them in such a financial bind they've had to borrow money from some very unsavory characters. Still, Johanna shoulders more than her fair share of the burden determined to take care of her aging mother and ailing brother along with doing most of the work at the inn. Johanna doesn't mind she just wishes sometimes her life was easier. She believes her luck may be turning around when Alexander Morton shows up along with Mr. Quail and his band. Things aren't always what they seem however and Johanna will have to learn quickly who to trust and who means more harm than good.

Thomas wants to make his sister, Johanna, proud. She's had a rough go of it since their dad died but it seems no matter what Thomas does Johanna finds fault with it. It gets on his nerves and he often accuses her of not knowing how to have fun. When he runs into Mr. Quail and his band mates he takes it upon himself to convince the men they need to stay at The Blue Hedge Inn rather than the nicer inn in town. Then when he meets Mr. Morton who not only agrees to pay him for carrying his bag but also helps him get back money he lost playing a rigged game Thomas just knows Jo will be proud of him this time.

Alexander is one of the best at what he does. His only allegiance is to the crown and Magistrate Ford, the man who rescued him from a life of crime and who knows what. The Magistrate Ford set him on the path of a law man. When Ford sends him on an assignment to figure out who means to betray the crown, Alex has no doubt that he will bring the traitor to justice. He's not thrilled about staying at the Blue Hedge Inn but he's willing to do whatever it takes. With the Inn filling up quickly and the pretty Johanna to serve as a distraction Alex may have taken on more than even he can handle. For the first time in his life he's considering a life outside of law enforcement, but thoughts like that can get a man in serious trouble when he should be focusing on finding the traitor before it's too late.

The Inn Keeper's Daughter is one of the best books I have had the pleasure of reading in a long time. The plot is so well written it will keep you guessing until the very end. It's not so drawn out it gets boring and it's no so intricate you can't follow. The characters have so much depth that I truly forgot they weren't real! Out of all the characters I would have to say Lucius Nutbrown was my favorite. He didn't necessarily have a major role in the story but he was definitely the comedic relief! I wondered if  Ms. Griep's named him Nutbrown because he really was a nut! What grown man walks around with a puppet talking to it like it's a real person and expecting others to do the same?! I love how you weren't able to figure out who the traitor was until the end. I had changed my mind several times thinking "okay I finally have it figured out" only to change my mind when someone else did something shady.

I don't want to give too much away because the book is really that good! I do want to encourage you to grab a copy and give The Innkeeper's Daughter a try. Even if it isn't something you would typically read I truly believe you will enjoy it and love it as much as I do!

You can grab a copy here:The Innkeeper's Daughter