A Dream of Home 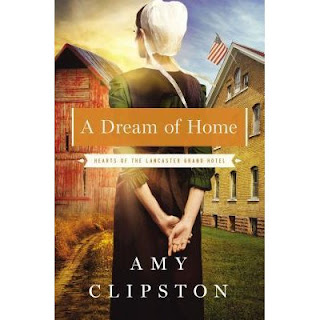 A Dream of Home is Amy Clipston's third book in the Hearts of the Lancaster Grand Hotel and my absolute favorite by far! As with the others in this series they can stand alone but I find them more enjoyable to read in order.  It really is readers choice.

In A Dream of Home we are introduced to Madeline Miller. She has served her country with honor as a nurse overseas, where she has seen and suffered tremendous loss, namely that of her fiance Travis. Looking to start over and leave all the difficult memories behind she moves into her Amish grandmother's home. Her grandmother passed away a short time ago and Madeline, or Maddie as her friends call her, was on her way home and didn't make the funeral.  She still feels the loss but finds peace in the farmhouse her grandmother left her. It was almost like she knew Maddie would return one day and she wanted her to have a place in the community she loved. Maddie didn't grow up Amish but her mom did, choosing to leave the community when she was a teenager.  She allowed Maddie to visit her grandparents often and Maddie loved everything about the community.

Madeline's neighbor, Saul Beiler, knows a thing or two about loss.  We first met Saul in book two of the series; A Mother's Secret. He was pursuing Caroline before she fell in love with Joshua Glick. Saul isn't the friendly sort and I didn't care too much for him at first. He is shy and awkward around women and sometimes he is down right rude.  Meeting Madeline is no exception. He is rude from the get go mainly because she is English and he's worried his daughter, Emma, might grow too close to their neighbor and leave the faith. There's no truth to that but Saul is extra cautious because his brother left the faith when he was a teen.  Saul has suffered much loss with his brother leaving, his parents dying, and then his wife being gone. He has erected walls around his heart and his life he won't allow anybody in. Even if it is his new friendly English neighbor.

I loved this book because we get to see two people trust the Lord to help them through their grief. They aren't without their faults, as I said Saul could be downright rude, unintentionally, but they knew who held their future even if they couldn't tell what their future held.  I disliked Saul for most of the book because he was so gruff. His attitude was basically I know what I''m doing and as the dad you have to do what I say, even if it makes no sense.  He flew off the handle when his daughter Emma baked cookies and did the neighborly thing and took some to Madeline.  I didn't see much hope for Saul and really wondered why Amy would write about a  character like him...until chapter 12. Chapter 12 is when I started seeing Saul  the way I believe the Lord would see Saul and that is, as a man who has suffered more than his fair share of tragedy and he's doing all he can to protect him and his daughter from future heartache. Even if it doesn't make sense to us it does to him. He clings to his faith with a death grip and is determined to keep his vows to God and the church.  If that means he can't hang out with his neighbor because she is way to English for him then so be it. He will be the bad guy if it protects Emma.

This book is a wonderful story of love.  God's love for his people and a parents love for their child. So many times as parents we have to do what we believe is right even when nobody backs us up. Whether it's choosing a different faith than the one you grew up with, or forbidding a seemingly innocent friendship because you can see all the pitfalls that lie ahead.  As parents, and followers of God, all we can do is trust Him to lead us where we need to be.  Even if it makes no sense, we should rely on our faith and go where God leads us.  Who knows what great things He has waiting on us if we trust and obey?

A Dream of Home (Hearts of the Lancaster Hotel book 3)
Posted by Chastity Ray at 3:49 PM