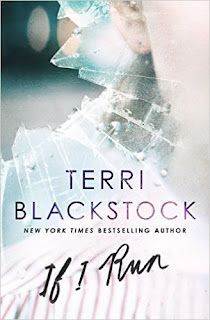 If I Run is the first book I've read by Terri Blackstock and I have to say I am impressed. It has everything a reader could ask for: mystery, intrigue, drama and of course love. It captures your attention from the first page and won't let go. I finished it in one sitting, it is THAT good.

Casey grew in a normal family of four, her dad was a cop and they lived in a nice neighborhood. Yet, when Casey was just 12 years old she comes home to find that her dad has committed suicide. She is devastated and fully believes that it is a cover up. Of course no one believes her, they think she is just a little girl who wants to believe the best of her dad.

Imagine everyone's surprise when years later Casey is wanted for murder of her best friend, Brent. The thing is, she innocent, but good luck proving that in a court of law. Her DNA is all over the crime scene, she didn't immediately call the cops and she skipped town. She must be guilty!

In a book where nothing is what it seems and you can't trust anybody, there are still those who fight for what's right, and Dylan Roberts is one of those.  He suffers from PTSD and was discharged from the military.  Dylan and Brent were best friends growing up and he is humbled when Brent's parents hire him as a PI to find Casey.  All Dylan knows is that she is wanted for murder and he wants to see Brent's killer brought to justice. This new purpose gives  him something to live for and hopefully will lead to other jobs, but is bringing Casey back really the right thing to do?

I was a little disappointed with the cliff hanger at the end but I absolutely can't wait for the next book!! The characters were complex and the plot was full of twist and turns.  I lost count of how many times my mouth dropped open in pure shock. Terri Blackstock is a talented story teller and you will be missing out if you don't add If I Run to your "to be read" pile. As a matter of fact you might want to put it on top!

If I Run by Terri Blackstock
Posted by Chastity Ray at 3:55 PM