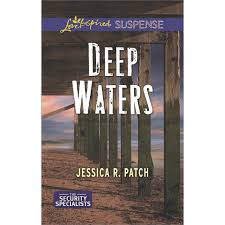 Deep Waters is Jessica Patch's latest installment in her Love Inspired security specialists series and I have to say my favorite so far! I've made it no secret that I generally don't like suspense novels but since finding Mrs. Patch's novels I have to say, I am quickly becoming a fan. She has the uncanny ability to make her characters flawed, yet relate-able, all the while crafting a story that will keep you on the edge of your seat! If you haven't tried a suspense novel or one of Jessica Patch's novels I highly suggest grabbing a copy of Deep Waters and diving in!

Caley Flynn loves everything about sea turtles and she has made it her life's mission to protect these precious creatures. Even though her family has been involved in the military and law enforcement for generations she prefers turtles. They're mild, gentle and as far away from danger as you can get. When Caley discovers an interns body at sea while walking on the beach her whole life is turned upside down. Not only do they not believe Mary Beth's death was an accident it appears everyone around her has something to hide and they will do anything to keep their secrets hidden.

Shepherd Lightman was supposed to be on vacation, he earned it. He had been working non stop for the last few months for Covenant Crisis Management. When his boss, Wilder Flynn, called and said to check on Caley, he did as he was told, even if he didn't like it. It's not that he doesn't like Caley, the opposite is actually true, it's just that he earned this vacation and well, Shepherd doesn't do comfort, he was bounced around from one foster home to the other until he was old enough to be on his own, then he joined the army and the rest they say is history. When Shepherd gets to Caley and hears her side of things he  knows he can kiss his vacation good-bye. There is NO WAY he's going to leave Caley alone with all the trouble that is surrounding them, but will he be the biggest threat of all?

First of all, what can be wrong with a book that surrounds sea turtles? In my opinion nothing. I know that it's a work of fiction but I found myself learning things about sea turtles I never knew before. Mrs. Patch must have gone through a lot of trouble to learn about turtles and  then include that knowledge and facts throughout her book.

Then there is Caley. I totally understood her reason for wanting to do just about anything besides being in the military or law enforcement. Sometimes, you just have to blaze your own trail, so to speak, and it was obvious that she loved what she did. I didn't quite understand her unwillingness to be involved with someone who had a dangerous job however. I mean yes, bad things happen, as obvious with the intern being murdered, but you love who you love and you can't help that. I also loved that even though she was the baby of the family she had moxy. She wasn't afraid to state her opinions and defend someone even if the world thought she was wrong. I felt like Caley and I could be best friends!

Shepherd Lightman is a good man, even if he doesn't quite believe it himself. He has done some bad things in his past, very bad things, but he's given his life to God and he's a different man. Even so, he knows he has no business falling for a lady like Caley Flynn. Maybe if he keeps calling her "Little Flynn" he can convince himself of that. When he sees Caley upset and shaken over the death of her intern, Mary Beth, he knows he will do anything and everything to protect her. He may not be in her league but he is a darn good soldier and nothing will happen to Caley Flynn on his watch.

Can I just say I love Shepherd! I didn't think I would at first with him being so hard on himself, but the way he fiercely protected Caley and was willing to do anything to protect her, I quickly changed my mind. Ha! Shepherd had doubts, I think all of us do, he knew he wasn't "good enough"for God yet he struggled with the fact he was indeed a child of God. He somehow figured if he messed up God would discount him, like the foster families did growing up. I admire Shepherd, he had no dad, grew up in bad foster families, but he chose to rise above all that. Did he make mistakes? Sure, but he grew into a man that anyone can respect and admire. All he wants to do is live a good life and make amends for what he did in his past. Who can't respect that? I'd like to think that we all have a little of Shepherd's gumption in us. When we're in deep waters who or what do we cling to?

I absolutely fell in love with Deep Waters! I couldn't put it down and I can't wait to see what Mrs. Patch has in store for us in her next installment in her security specialist series. So what are you waiting for? Grab you a copy of Deep Waters and get to reading! I just know you will love Shepherd and Caley as much as I do!

You can grab a copy here:Deep Waters

* I was provided a free copy of this book. All opinions expressed above are my own.
Posted by Chastity Ray at 1:48 PM