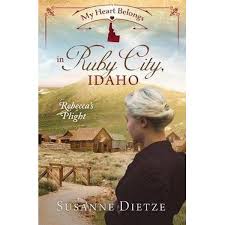 About the book: Looking forward to a quiet life and a full stomach, mail-order bride Rebecca Rice is pleased to marry her shopkeeper intended, Mr.Fordham, until the justice of the peace calls him Thaddeus, not Theodore--preceded by the title Deputy. When the newlyweds realize they've married the wrong partners with similar names, an annulment seems in order--and fast, since Rebecca's true intended is impatient to claim her as his own, not to mention Rebecca would never marry a lawman like her father. But when the legalities take longer than expected, Rebecca wonders if Tad wasn't the right husband for her all along....

I have never read one of Suzanne Dietze's books until now and I have been missing out! She has a way of crafting a story that leaves the reader wanting more. Her characters are complex, yet ones her readers can relate to. I love the show I Love Lucy and this book reminded me of that show It is full of wit and humor but it also has it's serious moments. I believe you will truly enjoy your trip to Ruby City I know I did!

Rebecca knows what it's like to be without. Her dad was a lawman, killed in the line of duty, one of her brothers died in the war and the other left to go out west and mine without so much as a backwards glance. She was tired of being at the mercy of others so it made sense to answer a marriage ad in the paper. Her journey was long and not without it's trials as her coach was held up by the gang of four before reached Ruby City. Yet, Rebecca has faith that God has called her to marry Mr. Fordham and she can't wait to belong to a family again!

I admired Rebecca's gumption. To make the decision to marry a total stranger in order to make a life for herself. Sure they exchanged letters but that's not enough to truly know someone. She had backbone and fire, she had to to survive all she did and then the gang of four. She even pulled a knife on one of her attackers! Even though she's had more than her fair share of hardships, Rebecca refuses to allow it to make her bitter. She is the first one to extend grace to some of the least desirables in town. The first to rush to someone's aid regardless of who they are or what they've done. I truly admired Rebecca and hope that I can be more like her, quick to help and slow to judge.

Thaddeus Fordham can't believe he married the wrong woman! Not only is she not his Rebecca, his lady spells it Rebekah, but she is Theodore's intended! He and Theo have been at odds ever since they fought to win Dottie's affection. In the end, she chose neither of the cousins but the rift she caused appears to be permanent. All he wants is to do the right thing, get a quick annulment and find his Rebecca. Surely Theo can understand that but when tempers go awry and the gang of four on the loose it appears that the annulment will be anything but simple.

You have to hand it to Thaddeus, I'm not sure I could keep my composure with so many things going wrong at the same time. He is definitely attracted to Rebecca but he is determined to do the right thing and get to annulment so she can be with Theodore, no matter how much it might break his heart. He even goes to great lengths to mend the rift the mishap has caused between Theodore and Rebecca. He's a stand up guy who puts everyone's needs before his own. Maybe it's because of the way Dottie played him and Theodore but he seems determined to do the right thing no matter the cost. He's hard working, driven, and a man of faith, anyone would be lucky to have him but he only wants one woman, and unfortunately she's promised to another.

I truly enjoyed my "trip" to Ruby City and meeting all of it's residents. They were definitely a colorful but loyal bunch. I hope Ms. Dietze continues the series. I'd love to know what happens to the other budding romances in the town.

You can grab yourself a copy here:

* I was provided a free copy of this book. All opinions expressed above are my own
Posted by Chastity Ray at 5:51 PM