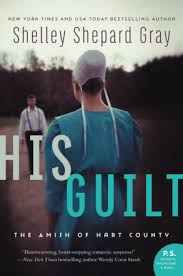 His Guilt is the second book in Shelley Shepard Gray's Amish of Hart County series. Even though it can be read as a stand alone I highly recommend reading the series.

Waneta Cain loves her job at Blooms and Berries nursery. She enjoys meeting people and helping them pick out just the right plants and trees for their needs. She has never really given much thought to how she does her job, but with the new guy, Mark, staring a hole in her she's beginning to wonder what he finds so fascinating. Instead of feeling flattered she's beginning to feel like prey. What is this guy's problem?

Mark Fisher can't help but stare at Waneta. She's so open and friendly with everyone else but has barely said two words to him all day. Growing up Mark didn't come from the best home and then as a teenager he was taken in for questioning when a woman was assaulted. Even though he was found innocent some people can't seem to get past the fact he was a suspect in the first place. Surely Waneta couldn't be like them, she has always been so kind and caring, well until now.

His Guilt is a story about love and forgiveness. Do we truly love others or do we hold their past against them? Waneta is forced to ask herself these questions when Mark points out how differently she treats him compared to others. Ashamed of herself, she makes a promise to herself, she is going to give Mark the benefit of the doubt and get to know him better.

Mark feels like the biggest heal. Why can't he just keep his mouth shut? Did he really need to call Waneta out like that? He can't really blame her for thinking the worst of him. I mean, look where he came from but still, he doesn't want her to be afraid to talk him. After Waneta agrees to give him a chance he's hopeful about the future. But when attacks start to happen to other women he wonders if he will ever be able to live in Hart County in peace.

I love all of Shelley Shepard Gray's books. She has a unique way of crafting a story that will touch in you in a way you never expected. I'm typically not a fan of mystery and intrigue but I fell in love with His Guilt. I love that it's a redemptive story. Mark may not have had the best start in life and trouble may follow him where ever he goes, through no fault of his own, but he is determined not to let his past define him. Waneta tries to treat everyone with respect but when Mark pointed out that she was treating him differently because of his past, she had to take a hard look at herself. She chose to practice what she preached, so to speak, and stand up for Mark when nobody else would.

Bad things are happening all around them. Will their budding friendship hold up when once again Mark's past comes back to haunt him? Or will things fall apart and force Mark to leave Hart County for good?

If you're looking for the perfect summer read or if you've never read one of Shelly Shepard Gray's books before I hope you will give His Guilt a try. I believe you will love it as much as I do!

Here's what other's have to say:http://litfusegroup.com/author/SGray

* I was provided a free copy of this book. All opinions expressed above are my own.
Posted by Chastity Ray at 5:24 PM