At Liberty To Love

Obedience is better than sacrifice…and trumps romance, no matter how sweet.
Profound loneliness propels a childless widow west to choose an orphan to share her life. On the way, a fellow traveler takes her by surprise. She never dreams, is unprepared, doesn’t need another man, but can’t get him out of her head…or heart. He’s so perfect—every bit the one she’d searched for as a young woman—except his mistrust of God has erected a wall she cannot breach.
Marcus Ford blames God and struggles for peace after losing his wife and baby. Not once has he considered another woman could be the answer, but the widow is like none other he’s ever met. He falls hard, but plans are taking him east. Hope dashed sends two hearts into the pit. If only Ford could forgive God or the widow ease up on her adamant resolve.
Will God’s mercy shine a beacon in the fog of despair and prove sufficient to heal their souls?
My Thoughts: I really enjoyed this book. It was a little slow starting for my taste but once I got into it, it grabbed me and would not let go. I felt bad for Marcus. To see so much loss and suffering, I can understand how it would be hard to believe there is a loving God. Rebecca is also very lovable but sells herself short. She believes her husband is her one and only shot at love. Despite being extremely beautiful she feels she is unworthy of another chance at love. She clings tightly to her faith so much so that it almost cost her love. Oh, how I long to be strong in my faith like that. To put God's desires and plans above my own. It's not easy, and the author didn't spare Rebecca the pain or gloss over the struggle of choosing God's ways over what she thinks will make her happy. The characters are so real it's easy to get wrapped up in them and forget their fictional. I highly recommend this book to anyone but especially those who love historical fiction. 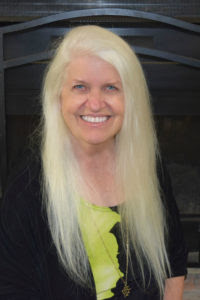 Caryl McAdoo is all about loving God! She currently writes four series: the historical Christian ‘Texas Romance’; a contemporary ‘Red River Romance’; The Generations, her Biblical fiction, and the newest Days of Dread Trilogy for mid-grade readers. Known as the Singing Pray-er, she loves praising with new songs the Lord gives her and prays her story gives God glory! In 2008, she and her high school sweetheart-husband Ron moved from the DFW area—home for fifty-plus years—to the woods of Red River County. Caryl counts four children and sixteen grandsugars life’s biggest blessings believing all good things come from God. Besides glorifying Him, she hopes each title will also minister His love, mercy, and grace to its readers. Caryl and Ron live in Clarksville, the county seat, in the far northeast corner of the Lone Star State with two grandsons. 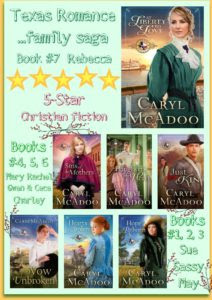 Rebecca, forty-two years young, has never known true love. Oh she’s loved—and had a best friend—but that special made-just-for-her soul mate, she’d never met. She settled, instead, and lived a happy life, even though never blessed with children. Then the unthinkable happened, and she found herself alone, widowed too soon by the Civil War that claimed so many lives.
Rather than throw a pity party, she prayed and formulated a plan for the rest of her life. God gave her a way to turn her mourning into dancing! She’d adopt an needy child to love and fill her lonely days with joy. And her sisters in San Francisco happened to have an orphanage. She’d never traveled by herself, but determined to put the idea into action, she left Clarksville, Texas for a month long journey to California!
This new story is one of my favorites as it extols the goodness of the Lord, how His plans are always so high above mere man’s, and how He moves those who love Him into place to receive His blessings. And Rebecca had loved Him since a little girl. He’d been her father when she was born without one and then when she’d prayed for a daddy, sent Henry Buckmeyer into her life.
And how do we show God we love Him? By our obedience to His Word.
Before, that’d come relatively easy for her, but early on her trip, a man climbs into the stagecoach and makes her uneasy. Glad that Daddy had bought her a Derringer and taught her to use it, she rides in silence, feeling his gaze and sneaking her own peeks from her reading.
With no idea of the test God was about to put her through, when the fellow traveler finally figures out who she is and speaks, Rebecca is taken aback by the surge of totally unexpected attraction. Marcus Ford was handsome, intelligent, and everything she’d looked for in a suitable man back when she’d been courted.
But alas, he almost hates God, blaming Him for the premature deaths of his wife and baby girl during the yellow fever epidemic that plagued New Orleans. If she leaned one thing from her mother, it was not to unequally yoke herself. Besides, her life had been planned. She had a goal and a child to save.  Plus, when her trip took her west, he went east for a job interview.
It was never meant to be. How many times do we make our plans only to be thwarted by circumstances beyond our control? We thought God had been leading us, we’d given Him the glory, and trusted the path to be in His will. So then why—when she at last had her life figured out—had she even met the man? She didn’t need another one, but never experienced what she did in Marcus’ presence.
When confronted with temptation, do we quote God’s Word to the one out to kill us, steal from us, and destroy our lives? Or do we toy with doing exactly what we know we should not? I pray as you read AT LIBERTY TO LOVE, you’ll be encouraged and root for my dear heroine to do what’s right and not give in, not fall into a place God never meant for her to be…or did He?

Giveaway:To celebrate her tour, Caryl is giving away eight prizes including the complete print set of the Texas Romance series. Enter here: https://promosimple.com/ps/9b0e