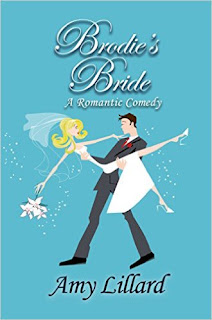 Brodie's Bride is one of Amy Lillard's contemporary romance novels and it's also the first contemporary novel of hers I have had the privilege of reading. Never in my life have I laughed so hard while reading a book. There was plenty of romance to go around but it wasn't sappy.

Savanna Morgan is what you would call your typical brat. Not necessarily spoiled by her father, but definitely bailed out of trouble more times than you can count. All he asks for in return is that she abide by his wishes, even if those wishes are to marry a womanizing scumbag like Parker. At first she is willing to do just that, I mean the  man is handsome, but his numerous extra curricular relationships become too much for Savanna to overlook. She tries to explain this to her father but he chalks it up to pre-wedding jitters. She knows that isn't the case and sets off to catch Parker in the act. This is precisely what gets her in trouble.

What she thinks is just a vivid dream with some make up hunk is actually very real! She stopped by the bar to gather her wits and orders what she assumes is plain iced tea. She orders them all the time at the bar inside her father's casino, but this isn't her father's casino and those weren't just plain iced teas. She finds this out the next morning when she wakes to find  herself married to some guy she doesn't even know!

Brodie Harper went to Vegas to celebrate his best friend's wedding. He's not normally a drinker, a beer or two at most on the occasional night out with the boys, but this is a celebration and tequila shots are in order. Hey, it seemed like a good idea at the time. That was until he woke up married to a hairbrush wielding madwoman. What was her problem anyway? Oh yeah, they're married and their strangers.

This has to be the funniest book I have read in a LONG time! Lillard opens the book up with humor and romance and never stops until the very last page. I've read her Amish fiction but was pleasantly surprised to find she wrote contemporary romance also. You immediately fall in love with and can relate to all the characters. You understand and can relate to their struggles. I'm not saying we've all had too much to drink, then wake up and found ourselves married! But there is so much more to the story and the characters than just that.

Savanna just wants to be loved. Not for who her father is or his money, but for who she is as a woman. What she brings to the table; her smarts and her heart. She wants what everyone else has. A small house out in the country somewhere, where families share breakfast, stories and jokes.  She knows most people would kill for the life she has had; boarding schools, unlimited resources and a hot fiance but it's all just so cold and lonely.

Brodie knows his share of heartache.  It seems like everyone he loves has left him, except Nan. His father was killed in the line of duty. His mom remarried and chose her new life and fortune over him. His wife left him for greener pastures in California. All he has is his grandma Nan and the best friend a guy could ask for, Jackson Masters. Yes sir, if he and Jackson can make HarMac Construction a go they'll be all set. The last thing he needs is a wife of inconvenience. She will probably hang on just long enough for him to be a success then leave, just like his first wife.

This lovely story is full of twist and turns. Love and loss but best of all redemption. I was so sad to see it end but I absolutely cannot wait to get my hands on the next one!

You can grab your copy here : Brodie's Bride by Amy Lillard